IOU Central, a Montreal based startup, is launching today. They have staked their claim as Canada’s first Peer to Peer lending company. We covered the funding announcement of Toronto based CommunityLend back in December.

Peer-To-Peer lending has been maturing quickly as a concept on the heels of successful sites like Zopa and Prosper, but Canada has so far had no such providers. Peer to Peer lending is a concept that takes a large group of lenders who are willing to lend out smaller amounts of cash and connects them with borrowers who need access to cash at a rate that is below the standard credit card rates, but they are generally willing to pay a higher rate than if they had to go to a bank. A lender can be anyone with a bit of extra cash that they would like to get decent returns on. 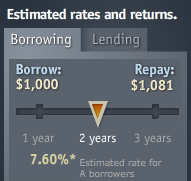 From a borrower’s perspective, IOU Central operates much like any other lender, in that a borrower’s initial “rating” is based primarily on their credit score. You can however supplement that score by uploading a number of other documents to do things like prove your income, itemize your monthly expenditures and other things that can bump up your overall score.

IOU Central charges Lenders a Lending Fee, which works out to about 0.5% annualized, calculated based on the amount of outstanding loans you have remaining each month.

The company was conceived over a year ago and their site has been in development for just under a year. There are currently 7 full time employees and they have raised a round of funding which includes Angels and VCs, but they did not disclose the amount of funding.

I asked Sam Bendavid, VP of Business Development for IOU Central, what sort of regulatory or legal issues they encountered running up to launch and he indicated that things were quite smooth. IOU Central is registered in Quebec as a lender and they worked closely with their law firm in developing their set of Legal Agreements.

IOU Central will be focusing most of their initial marketing on potential lenders. This is a smart move as lenders will be far more scarce than borrowers. Perhaps the days of getting a loan from Uncle Vinnie are over, and Canada now has a safe, regulated, and legal place to secure peer to peer loans.