When a critical server crashes in most businesses, an alert email is sent out, often to a group of people, in the hopes that someone will look into it. But who should handle the problem? What if they are unavailable? Or what if no one was checking their emails? A crashed site can result in lost revenue for a company but the problem of alerting the right people in the right way was traditionally only available to large enterprises.

PagerDuty is a new Toronto startup that aims to solve this problem through their newly launched web application at PagerDuty.com. Started by former Amazon employees, the newly launched (and currently free) beta service is a well-executed, easy to use to solution to a common and costly problem. 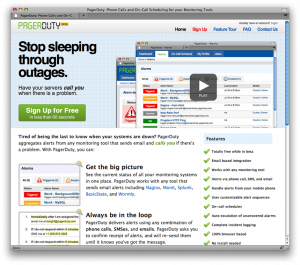 I love how it works. To use it, you sign up using a one-page form, and you’re then set up with your own account (accounts are free during their beta, but it’s not clear how long they’ll be in beta). You then set up your own alert software to send emails to PagerDuty whenever you want a notification (this is the most time-consuming part because you’ll need to set up each monitoring software individually). PagerDuty doesn’t do the actual monitoring; rather, it receives alert messages via email and routes them to the right person on your team based on rules you build. Alerts can be in the form of SMS, phone calls, or email.

One of my favourite parts of the software is the great UI on the built-in calendar that allows you to set up which person on your team is on-call at any time.

PagerDuty prevents a sysadmin’s worst nightmare: coming in to work on a Monday morning and finding out that their site has been down for the entire weekend. […]  When something goes wrong, PagerDuty springs into action by calling, SMSing, or emailing the engineer on duty.  If for some reason, PagerDuty can’t get ahold of the person on-call, it automatically escalates the alert to someone else.”

Everyone on the PagerDuty team spent some time working at Amazon which uses sophisticated internal tools for handling problem alerts. According to Solomon, they created PagerDuty because, after leaving Amazon, they “spent some time looking for something similar to what Amazon has, but the solutions we found were either lacking key features, or were priced well beyond what we were willing to pay.”

The team had the option to possibly start up PagerDuty somewhere in Silicon Valley, but in the end, they chose to start in Toronto because of reduced costs and the fact that they had a better network here. “the Valley wasn’t really an option for us. We chose Toronto because all of us grew up here — most of our network is based here, so it really made sense to try not to stray too far from home,” says Solomon.

PagerDuty has done many things right. The website looks slick and the UI is smooth. (Some have commented that the front page may look a lot like some other Web 2.0 startup websites but that’s probably a good way to start, in my opinion). The problem they deal with is a real one that their team has experienced in the past, and they’ve solved it elegantly. Some of the challenges I expect they’ll have is that the market will be limited to a specific segment of companies that already use server management utilities that send emails – marketing to the right people in these companies and gathering enough adoption will be a challenge at least in the beginning.

I’m going to try using the service at my company.

“we have a structural problem and this means Canada’s ability to drive innovation will weaken and we will see the overall economy suffer.” – Gregory Smith, President of the CVCA

The CVCA has released their Q2 2009 Venture Investment data.

So it’s bad. Really bad. This is not the first time. It probably won’t be the last time we hear about the troubles of Canadian VCs. Anybody really surprised?

The VC industry in Canada has been in turmoil for a long period of time. There are regulatory and structural hurdles, which the CVCA is actively lobbying politicians for the support. This includes lobbying for support to SR&ED tax credit programs, offset agreements, incentives for investment, etc. I’m not sure that “establishing a blue chip, limited-life panel comprised of company executives, university presidents and venture capitalists with the express mandate to devise a road map for Canada’s technology industries” will provide the solutions necessary to Canadian entrepreneurs. And while I think that VCs are an important part of the ecosystem to support and nurture entrepreneurs, they are only part of solution. It is the entrepreneurs and startups that will save venture capital in Canada.

What does all of this mean?

Does this sound familiar? It’s pretty much verbatim out of Sequoia Capital’s R.I.P. Good Times presentation or Ron Conway’s email to his portfolio. This is not new or news to Canadian companies. Raising money has been difficult for a while in Canada. Our investors have preferred later stage investments, in the H1 2009 just over 60% of all of the capital when to later stage deals (Series B and later). We’ve seen a need for companies to be able to demonstrate a product, customers and market potential just to raise early funding.

There are Canadian ventures that are growing and successfully operating on revenues. Along with a set of emerging technology ventures that have closed non-traditional funding rounds. Well.ca raised $1.1M from angels. J2Play was acquired by Electronic Arts. It’s possible to raise money, to get acquired, to operate successfully during tough times. You just have to execute better than your competitors.

So what is an entrepreneur supposed to do?