Some rights reserved by quapan

I was reading an excerpt from Noah Wasserman’s The Founder’s Dilemmas: Anticipating and Avoiding the Pitfalls That Can Sink a Startup (Kauffman Foundation Series on Innovation and Entrepreneurship)

about Founder Dilemmas: Equity Splits and it struck home. Equity splits and distribution are often the key issues related to power imbalances, perceived injustice and tension amongst cofounders.

In Noam’s dataset, 73% of founding teams split equity within a month of founding, a striking number given the big uncertainties early in the life of any startup. The majority of those teams set the equity in stone by failing to allow for future adjustments to equity stakes if there are major changes within the team or the startup…

Setting the early equity split in stone is one of the biggest mistakes founders can make. With their confidence in their startup and themselves, their passion for their work and their mission, and their desire not to harm the fragile dynamic within the nascent founding team, cofounders tend to plan for the best that can happen. They assume that their early, high levels of commitment will last long into the future, rather than waning as the challenges of founding begin to sap their passion for the idea and for each other. They assume that no adverse events will change the composition of the team.They also tend to take a very short-term view of the factors that should affect equity splits.

Sometimes it just doesn’t work out, and a founder will choose to leave the company or have the choice made for them. The question is how do you create a set of agreements that is fair to all of the cofounders. Often we think that standard employment and shareholder agreements cover much of the difficult situations that we can encounter with cofounders. But as cofounders it starts by really understand what you each are looking for, and then making sure your agreements cover the specifics of your situation.

A couple of things. I think all founders stock should vest. I like it when founders purchase their initial shares with a one-time acceleration clause for a small percentage at purchase (3-5%). I like when founders’ stock reverse vests with a traditional one year cliff. The initial vesting acceleration is because things can change at 6 months and it seems fair to value the capital risk that each founder has taken at purchase. And the one year cliff because it is standard. What I’ve seen a lot is founders that don’t do the small initial accelerated vesting clause.

What tips do others have for equity splits? acceleration clauses? terms? That as cofounders we should put in our agreements. 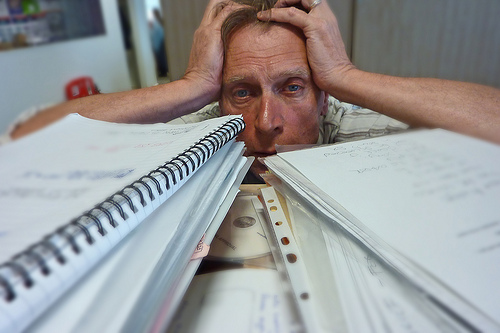 Some rights reserved by net_efekt

StartupNorth contributor Ray Luk (LinkedIn, @rayluk) announced the launch of Scalability Inc. (@scalabilityinc). It’s a great service that provides backoffice services including bookkeeping, accounting, government filings, payroll, record keeping, and human resources. It’s the combination of tools and the people with the expertise to help with timing that can make a huge difference. Ray seems to have nailed a need in the marketplace with Scalability Inc.

What are the must have tools that you are using in your startup’s back office?

What are you using in the back office? Who are the consultants and providers that we’ve missed?

What has he done for us lately?

I don’t often look to politicians to help out startups. Typically when they do, they mess it up and make it worse than it was before. And probably if I looked at Rob Ford’s track record of do-little-ness, I’d think even less of trying to push him to get involved in our just blooming, fragile startup ecosystem.

But, being here in New York the last few months, I have seen Mayor Bloomberg involved in some helpful, innovative projects. In fact, in a fascinating report about the New York startup ecosystem titled “New Tech City“, on page 24, specifically outlines the “Bloomberg Effect” and some of the tactical steps he’s taken to bolster New York’s early stage, rising tech startup community.

I’d love to hear this said about any government entity at any level in Canada.

Now I know some of you have distant (errrr… recent) memories of political thoughtfulness gone wrong (cough cough, the inadvertent disappearance of the entire angel investing class). The typical refrain I hear from folks in the tech scene is something like “Gov’t should provide money and get out of the way”. But I’ve seen the Bloomberg administration do a lot more, successfully.

For instance, here are two extremely low cost areas where city politicians can help startups – promotion and their powerful networks. I’ve been at four startup events here in New York in three months, and Mayor Bloomberg has been at two of them.

“He’s visited scores of start-ups, given major speeches at local industry events such as Tech Disrupt and the NY Tech Meetup, and last year installed a chief digital officer to help coordinate promotion efforts. As the “mayor” of City Hall on Foursquare, he’s even become an avid user himself.” — New Tech City Report

The city hosts an event called NYC Big Apps. Basically the city has been opening up up more and more data each year and runs a contest to see who can build the best mobile apps based on that dataset. The event has about $50k of awards, the grand prize winner gets $10k. The event looks to be partially covered by sponsors (BMW’s venture arm seemed to be prominent at the event). Folks from NYC’s Economic Development Council are there en masse, helping facilitate introductions between investors, well networked folks & startups. If you are a winner, you’ll get a chance to pitch to some of NYC’s best investors (many of whom support the initiative and help judge the apps themselves) – Fred Wilson et al. Not only can you see Mayor Bloomberg at events the city runs, but you can see him at other big events in the city – Disrupt, NY Tech Meetup, etc.

Wouldn’t you love to see cities get involved with key startup folks in the city (like say Howard Gwin or Boris Wertz) and run some interesting events akin to Big Apps. I’d also love to see prominent politicians supporting existing events like say Demo Day. How about hanging with Rob Ford at Startup Drinks?? Yeah, didn’t think so… but maybe a hipper, cooler city councillor?

On top of that, politicians could easily use their followership and social media outreach tools to preach and promote local startups. I’d love to see Mayor Ford tweeting about reading his Kobo, or hear Vancouver’s local government talk about their usage of HootSuite. I’d love to see some city councillors buying a new shirt using Buyosphere. Anything really to show they know entrepreneurs exist and can use every piece of help they can give.

Why Isn't Rob Ford Talking About Toronto Startups Like This?

Less talked about in the NYC Tech City report is that NYC is overhauling their own contracting/vetting procedures so smaller startups can bid and have a chance on winning meaningful business with the governments. Why shouldn’t City Hall’s use Freshbooks for instance, or FixMo? Presumably it would offer some real cost competition vs the usual city hall tech vendors.

Or better yet, how about introductions and biz dev help? New York’s Economic Development Committee actually runs events abroad (like in China), where they use their network to provide trade excursions for local New York startups. I know, because we participated in one of them (in China). We had the chance to meet lots of industry leaders in China and received meaningful business development introductions.

And then there are the “dream-big” projects. New York has created a private-public partnership, providing millions in funding to build a new engineering school with Cornell, in New York City. Or how about a high school devoted to software? I mean we have high schools for the arts littered across Canada… and I’m pretty sure that a software oriented high school might have a bit better of a business case than say… the Etobicoke School For The Arts.

So, dear Canadian politicians, I dare you to be creative and get more involved. You can actually help startups out! Talk to influential key people in your local startup scene and ask them “how can we help?”. Use stuff created by local startups, evangalize and promote the crap out of them.

And I’d love to hear more from our audience on ways that your local gov’t has helped (or has not helped) from within your own communities.

PS – A weird corollary post might be titled – “How startups should get involved in government and politics”. When are some of you going to become city councillors and mayors? :)