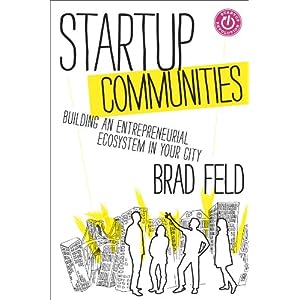 Brad Feld, managing director of Foundry Group, is no stranger to the Canadian tech startup scene – he was a speaker at the C100’s AccelerateMTL event in 2011.

Over the past year, I have had the opportunity to get to know him and he has been a source of inspiration and support to me professionally. Brad is one of those rare VCs, his contributions don’t stop with the money. He is very generous with his advice and has been on a passionate mission in the past year to crack the code on how to build an entrepreneurial ecosystem in any city, hence the title of his new book: Startup Communities

Startup Communities: Building an Entrepreneurial Ecosystem in Your City

(pre-order available) isn’t a book you that you will put down easily, but is one you will pick-up often. In fourteen chapters and one fell scoop; Brad makes us smarter and wiser about what it takes to nurture a vibrant startup ecosystem in any community.

Feld sets the tone early in the book by stating that “Startups are at the core of everything we do.” Feld implies that it’s easier today to create and evolve startup communities “as a result of our networked society”, and he tosses away long-drawn old-school frameworks and previous theories that were primarily based on macro-economics, socio-demographics or geographical parameters. His thinking is framed around what he labels as “The Boulder Thesis”, a fresh framework that is based on pragmatism and lower barriers of entry. It’s all about on-the-ground reality as a lever to making things happen.

“The key to every successful startup community is startups. If you do nothing else, make sure all the founders and founding teams are visible and connected to each other.” That’s a golden statement to be reminded of. Remember, his message is aimed at the entire community.

The Boulder Thesis is grounded in four key components: a) entrepreneurs that lead, b) leaders that commit, c) an all-inclusive mentality, and d) activities up and down the entrepreneurial stack. The book details them.

A 17-year resident of Boulder, Brad observed that while Boulder didn’t have a lot of local VC’s, it did have a large number of VCs that viewed companies in Boulder as attractive to invest in. This fact alone means that any city cannot complain about not having a lot of local VC’s. Rather, they should focus on making themselves attractive to VC’s wherever these VC’s may be.

Then comes a key tenet of the book: there are Leaders and there are Feeders to any ecosystem. If you’re in a startup community, know who you are, and what your role is, but don’t confuse the two. So, who is a Leader and who is a Feeder? “Leaders of startup communities have to be entrepreneurs. Everyone else is a feeder into the startup community. This includes government, universities, investors, mentors, service providers, and large companies.” Entrepreneurs, rejoice.

Driving the Leaders vs. Feeders point hard, Brad asserts that “the absence of entrepreneurs as leaders, or the overwhelming leadership by feeders, will doom a startup community.” Message aimed at the Feeders mostly.

Chapter Six gets at the crux of the community build-out, and something that every city wants to know: What are we doing wrong? Brad nails the classical problems:

Brad goes on to list in great details the many activities that make-up Boulder’s community what it is. My advice: when you get the book, use it a checklist and see what your city is missing.

In Chapter Eight, Brad takes us on the case study of TechStars, and in it he rubs in the fact that there is a distinction to be made between Accelerators and Incubators because they are formed differently and have different objectives.

Chapter Nine focuses on the role of Universities and it ends with this advice for the entrepreneur: “The relationship between a startup community and a university can be a powerful one, but is often complicated. By focusing on specific activities and remembering that the university is a feeder to the startup community, great things can happen.”

Aided by Canadian Paul Kedrosky, one of the ending chapters lists the common myths about startup communities. I’ll highlight two of them:

Startup Communities is a call for introspection aimed at any city, community, entrepreneur, developer, funder, leader or feeder. The book makes you think about whether you’re doing the right thing. It should prompt every city or ecosystem to answer the tough questions: Do we have enough leaders as entrepreneurs? Are we going to stop making excuses? Can we work better together?

If you’re involved in technology startups, this book will not just touch a nerve. It will run through your spine.

How do you think Canada is doing in regards to building entrepreneurial ecosystems in the major cities?

Editor’s Note: The author, William Mougayar is CEO of Engagio, a universal Inbox and Discovery Network for social conversations. You can pre-order Brad’s book on Amazon and ensure delivery as soon as it’s published in September.

William Mougayar
William Mougayar is the founder of Startup Management. He is an advisor and mentor to startups and grownups. Previously, CEO/Founder of Engagio (sold to Influitive), and Eqentia. He has more than 30 years of strategic, operational, and leadership experience in the technology industry, as an entrepreneur, business executive, professional speaker, management consultant and best-selling author. His career spanned 14 years at Hewlett-Packard in a mix of senior sales & marketing management roles, 10 years as an independent thought leader, and 2.5 years as global VP of Corporate Marketing at Cognizant. Follow him on Twitter at wmougayar, and subscribe to his widely read weekly newsletter on Startup Management.