After receiving a cease and desist letter for use of the trademark ‘dex’ for their new CRM service, Mercury Grove has decided to crowdsource the company’s product name. Pitch in!

Mark McQueen gave Roger Martin an ‘F’ for his findings on venture capital in the Seventh Annual Report on Ontario’s Competitiveness and Prosperity.

Update: ClutterMe received bids for as much as $48,327 CAD, but the tenacious founders were looking for more and decided to continue growing the site instead of taking money off the table.

Montreal Start Up announced today the closing of an additional $2,000,000 for its venture fund from the Solidarity Fund QFL, bringing total assets under management to $5,000,000. The Solidarity Fund QFL joins Investissement Québec, la Conférence Régional des Élus, and 20 of Montreal’s most successful entrepreneurs and investors who partnered with Montreal Start Up to address the need for more early stage capital and mentoring.

“We have met with hundreds of entrepreneurs since our launch and the quality and creativity of the ideas we are seeing is constantly improving. We were having to turn down good deals because of the limited amounts of capital available to us. The support of Solidarity Fund QFL will allow us to support more of Montreal’s best startup companies.” John Stokes, Montreal Start Up

Also revealed were Montreal Start Up’s four latest investments: Mobilize Central, KeenKong, The Book Oven, and Oneeko all of which are based in Montreal. These investments are in addition to its previously announced investments in Standout Jobs and Akoha.

This is all fantastic news from Montreal, easily one of the most vibrant startup communities in Canada.

Joey offers his summary of the University of Waterloo VeloCity Fall 2008 Project Exhibition. 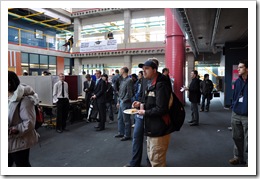 Velocity is a student residence, it is a dorm for 70 University of Waterloo students that encourages students to form teams and build projects to be showcased at the end of term Project Exhibition. This was the first group of students in the dorm and there were 16 student projects created. Each team of students provided a 3 minute pitch to the audience in the lobby of the Davis Centre. Amar Varma from Extreme Ventures had a Cdn$1000 prize for the “project team deemed worthy”.

Sparknav was the winner of the $1000 from Extreme Ventures.

The projects ranged from a series of ideas expressed on posters; to functioning software. As Rick Segal and Austin Hill conveyed at StartupEmpire, it is great to see entrepreneurs get up in front of an audience and give their pitch. One of the main reasons that entrepreneurs in other locations (particularly Silicon Valley) are better at giving pitches is the number of times they give the pitch and the amount of feedback they receive.

Generally, the projects and the presentations were uninspiring. This is not to say that the entrepreneurs should be discouraged. But that I was underwhelmed by both the content and the presentation style. It leads me to one of the key takeaways from StartupEmpire. It is that we need to build a better formalized mentoring network for young entrepreneurs. When I look at programs like Techstars in Boulder, CO they are built on the notion of mentorship. Just look at their Mentors (there are 59 listed on the dang page): Brad Feld, David Cohen, Howard Lindzon, Jeff Clavier, Stewart Alsop. The mentors are from all over the US and cover a wide range of expertises in different industries and functions. If an entrepreneur can’t find a mentor that can listen to their situation and coach them on how they could perform, then the entrepreneurs shouldn’t be in the TechStars program. To this end, Jesse Rogers called me out on providing mentorship to the VeloCity students. I will be following up with Sean Van Koughnett to offer my time to mentor any of the teams or students.

For the hell of it

“If you build it, they [sic] will come.” – Shoeless Joe Jackson in Field of Dreams

My first piece of advice for any of the VeloCity student is be realistic about what you are building. So many entrepreneurs appear to take the “Field of Dreams” approach to project selection. There is nothing wrong with this approach, however, just because you’ve built software that solves your problem doesn’t mean that there are customers, a potential market or any reason to raise funding. A programming exercise does not by default equal a multi-million dollar company. There are a great number of projects and tools that were developed as to solve problems for a developer (look at rake, ant and Capistrano) that are not businesses. They enable developers to be more productive but are not great businesses.

Some of the projects like Sparknav, Emoshion, Find It Off Campus showed the first steps to becoming real businesses. They demonstrated the ability of the team to deliver functioning, stable code. They demonstrated a need in the community – Find It Off Campus already has 108 rental properties after less than 2 weeks of being live. And Emoshion, while too narrowly focused as pitched by the founders to be a great business, it demonstrates a potential white-labelable mobile social networking application that I’ve seen requested by ad agencies and marketers. These startups could benefit from time with experienced technologists, business development persons, investors, and marketers about how and when to monetize and grow their offering.

It was great to see 16 short presentations from the residents of VeloCity. It will be interesting to see if the quality of the projects and outcomes increases at the end of the Winter 2009 term.