“2.3 billion people are now globally connected by the Internet. There are 1.1 billion mobile 3G subscribers. Almost 30 percent of all US adults now own a tablet. Mobile is cited as source of 8% of all e-commerce.” from Forbes citing Mary Meeker’s 2012 Internet Trends

What are the typical top sources of customers for early-stage SaaS companies?

What are the typical top sources of customers for early-stage SaaS companies? 6 Answers: http://t.co/Q5XEThTv on @Quora 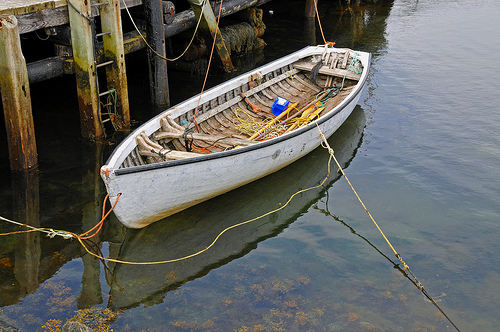 Most people love to just give advice as if it’s set in stone. These thoughts cannot be applied to every startup, use your own judgement and do you own due diligence.

Rewind to 2009, we had a stellar year. We had created Tether.com from a simple idea to millions of dollars in revenue. I evaluated various aspects of this success and realized we were paid huge dividends because we made a significant difference in the way people were able to work. At the young age of 21, I faced two options:

Luckily (or unfortunately) I took the second option, creating products that would hopefully disrupt markets. I decided the market I wanted to disrupt was computer programming.

Being from Nova Scotia, a small province not really known for its stellar technology, I was faced with two options:

We’re known for lobsters, which is a far stretch from computer programming.  Raising cash locally was a stretch, particularly given the very early stage of the business. And while it feels like a feeding frenzy in the Bay area, most US-based investors wouldn’t know where Nova Scotia is on the map (while Jevon [LinkedIn, @jevon] is trying to change that, outside of Boston many might still have a hard time finding us) and putting capital into an early company in a location they don’t know felt very unlikely.

The best option was to self-fund Compilr with the expection to go from initial idea through to revenue much like we had previously done with Tether.com. We had an idea,  we had a team that was capable of building, we had users signing up to use the service (our user base had grown 13x in a 3 month period), but we had no revenue. And we were running out of cash. Getting people to pay turned out to be very challenging. More challenging than it was with Tether.com.

At some point, I realized that I needed help. The help probably wasn’t cash. Raising millions of dollars in funding, wouldn’t solve our problem. The money could extend our runway, give us more time to increase our output on features, bug fixes, but if no one would pay for the product – it didn’t matter.

If money alone wasn’t the answer, maybe it was accelerators that could help (I hear there might be an incubator/accelerator bubble or something). I applied to Y-Combinator with a video from my beautiful rented apartment in Dominican Republic, but ultimately was turned down. I applied to a local entrepreneur competition, Compilr placed 3rd  but sadly there was no financial benefit. At this stage the product went to the back-burner, the development team focused on other projects, the question was: what to do next?

An angel investor introduced me to Seedcamp. And while Seedcamp was Europe focused, they had a strong portfolio of very early stage software companies. Long story short: I applied, invited to pitch in New York, and was accepted to the program. Going to an incubator was a big decision. I was getting mixed advice from my mentors, with some mentors telling me “you are an idiot for valuing your company so low” and others saying “Seedcamp had over-valued the company given the traction”.

It’s a hard decision, but ultimately I decided that the small percentage I was giving up Seedcamp was a good fit for Compilr and me. Seedcamp was providing value to help Compilr, and if I was successful we could return the favor so they can invest in other entrepreneurs. It felt good, like a fair trade.

I’ve determined that startup accelerators can provide returns even beyond the bottom line (or the post-money valuations). Here is what entrepreneurs should expect from an incubator:

Validation
When an accelerator says, we like your idea and your team and want to give you a small bit of cash, this is significant validation. I think this is the death row for most startups. If your team doesn’t get any validation, will it just become a “back-burner” project. Accelerators can help provide entrepreneurs early, meaningful validation.
Exposure
Always insure that your accelerator is able to provide you with adequate exposure. Every time we were involved in a Seeedcamp event we saw about a 30% increase in traffic, which was easily identifiable from those particular events. Accelerators are press whores, they want just as much exposure as you. Weasel your way into anything that could be related to you.
Accountability/Focus
Being a single-founder with a crazy idea, accountability sometimes goes on the back-burner. As a founder/CEO sometimes you have ideas that are completely inaccurate and have no foundation. Having a team that can slap you around a bit, when you decide you want to pivot from an online IDE to an online garden center is a great asset.
They don’t solve your problems.
My reason for joining an accelerator was simply, if I get enough smart people looking at my business, I’d get to revenue faster. The fact is you could have the most brilliant advisers or mentors helping you, but they still can’t solve your problems. They just aren’t connected into the industry like you.  In the end you need to make strategic decisions on where you want to go.
Competitiveness
Joining an accelerator, is always competitive. Being apart of an accelerator provides a degree of competitiveness. When your teammate just raised $910k from top US investors and you haven’t done shit, you instantly feel like you want to go out and raise $2m.
Prepare to insult everyone
The worse part of having really great mentors, is when you are in a rut, they’ll tell you “they told you so”. If you didn’t follow a mentor’s advice they may shun you, they may refuse to give you advice on the “basis that you don’t follow it”. The biggest problem if you take one mentors advice, you will insult another.

Can I help? If you think I can help, shoot me an email: [email protected]

I was doing some thinking a few weeks ago about why I am a founder. Everyone has different reasons they look to in order to get through the long grind of being a founder. It’s tough and very thankless, so you need to find the tangible reasons that you can look to both to measure progress and to remind yourself that you are making progress on all fronts.

Those reasons are all important ones, but they pale in comparison to what drives you to go beyond simply being a founder to being an obsessed, irrational and irrepressible builder: The Idea.

When it comes to building a lasting company The Idea is more than just a problem you’ve identified. The idea is some new insight in to the world. When you have an idea then you get a lot of things for free along with it:

The entire business will continue to evolve, but truly great ideas are unshaken through constant change. Having an idea that is worthy of spawning a startup is a standard that you should hold yourself to. You’ll know the big one when it comes.

There are things that come up along the way that make you think you’ve had a big idea and those are the reasons that so many startups get started but lose steam quickly: you find a simple problem, you have an idea for a feature but mistake it for a product, or you find a “vision” which is really just a statement.

These things do not last, but ideas do. An idea should be novel, unexpected and impossibly big.

These are companies who show us the future and promise to take us there. We use them, buy from them and care about them because they aspire to a big idea and when the stumble along the way it makes it far easier for us to be patient with them.
Mine? At GoInstant we thought the web should be a multi-player experience.
What’s your big idea?