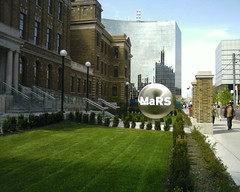 The MaRS Center is seeing the second phase of development go on hold.

Phase II, which involved the development of a second tower on the west side of the property, has been cancelled, despite having been ahead of schedule so far. The reason given by Alexandria Real Estate Equities Inc, the American developer behind the project, is that they just couldn’t secure enough leases to make the project move forward.

I first heard about this a few days ago when an unsubstantiated rumor was posted on Urban Toronto (a great forum that I lurk in). Then when I was up in the area yesterday I noticed that the site was pretty quiet, but still wasn’t sure. That was until I looked at the National Post this morning and it was right there on the front page.

The MaRS center is a confusing thing for tech entrepreneurs. There are a few startups in there, and it is home to a Celtic House office and RBC Ventures. They also have some really fantastic people working there, such as Peter Evans and Allen Gelberg, who have reached out to the startup community in a big way and who have provided a venue for things like Mesh and the Facbook Developer Garage.

My sense is that MaRS has a much bigger impact on the medical research and commercialization community, but I am not connected to that community and have no way of knowing.

MaRS was never a center for the tech community however. Simple economics make it impossible for such a high-cost building to truly have an impact at a community level. There are three old garment factories at Spadian and Queen that have had more of an impact. This isn’t a new phenomenon either, when I was building some of my first startups in Charlottetown, the provincial and federal government spent almost $35million building something called the Atlantic Technology Center.

In terms of the size of the city and community, the Atlantic Technology Center was even more ambitious than MaRS, and it was even more disconnected from the community. While some of the best startups were moving in to great historic office spaces, government contractors and service firms piled in to the Tech Center. It was high-cost, anti-septic and too ambitious.

The truth is, if you want to transform the tech community in a place like Toronto or any other city, you don’t need $20million, or $200million. For all the dreams of trying to turn some city in to the “next valley”, the point gets missed every time. You could put Toronto, Montreal, Halifax, Calgary or Vancouver on the world map with almost no money. Put a couple million together and find the right people to deploy it. We need to start loving our cities and the communities that are coming to life in them.

The problem is that government officials can ascribe value to real estate. We all love to build big things that people can see, touch and talk about. Until those same people can understand the value of a vibrant and productive community, then we will never get the participation that we truly need.

It is worth pointing out that MaRS has billed itself as a home for academic research and eventual commercialization, not simply a home for the tech community. I believe that the same fundamental principals are in play however, and that the task of building a commercialization engine in this city is not a real estate problem, but a social one.

I don’t know what this means for MaRS and their efforts in the community, but I hope it is a chance for them to step back and refocus. They have a great team that I believe will still do great things.